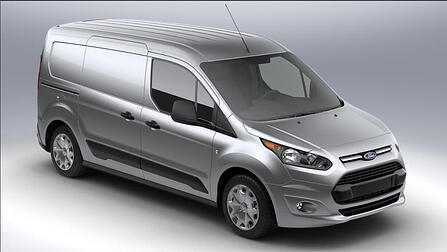 The growing economy, less expensive gas and a steady rise in the demand for delivered goods and equipment via traditional methods and same day delivery has seen impressive sales for new vehicles in general and also in commercial vehicles. While many of the leading automakers are reporting sales running at rates that are between 10-20% higher than a year ago (and in some cases even above that) we’re also seeing sales of trucks and commercial vans reporting very similar increases.

According to data from automakers the sales for commercial vans was especially robust in 2014 with the market improving as the year progressed. These encouraging numbers demonstrate a commitment to both fleet reinvestment and expansion which both mirror a delivery market that has grown to new heights. The composite final sales figures are as follows:

Among those with the largest market share it is Ford who will be most enjoying these results as they introduced their new Transit Connect in a growing market that saw excellent adoption rates for the new vehicle. The Transit Connect is aimed at urban delivery services with the benefits of very good fuel economy for a driving environment that is constantly stop/start plus a very small turning radius to help on city streets. 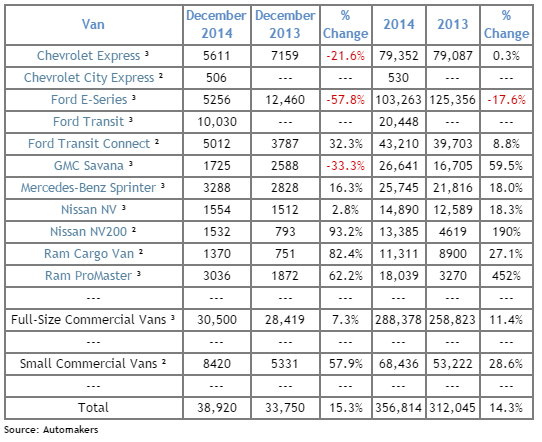 The small commercial van category was dominated by the Ford Transit Connect with total sales of 43,210 vehicles which accounted for just over sixty three percent of all van sales in that division.  Following far behind the Transit Connect were Nissan’s NV200, the Ram C/V Tradesman, and the 2015 Chevrolet City Express. Things may change this year with the addition of General Motors’ latest offering the City Express, meanwhile Dodge will be replacing the C/V Tradesman this year with the Ram ProMaster City during the early part of 2015.

Ford also continued to dominate the full size commercial van sector with sales of the soon to be discontinued Ford E-Series leading the way with 103,263 units which was a fall from 2013 but still clearly a front-runner. With 2015 poised to be another record breaking year for same day delivery and urgent delivery services we’ll watch with interest how commercial van sales perform in the months ahead.

some source data for this article courtesy of goodcarbadcar.net