Could electric vans and drones be the future of same day delivery? 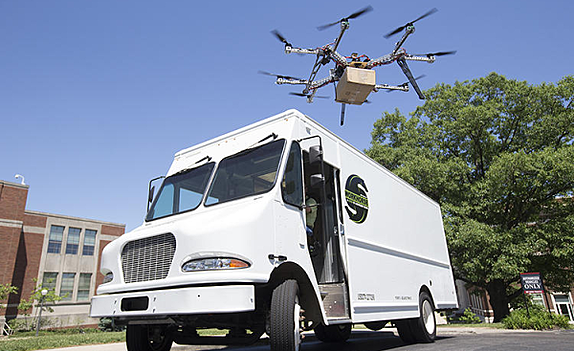 As the price of fuel continues to fall there seems to have been a similar decrease in the amount of articles about environmentally-friendly vehicles and 'green transportation'. That's most likely short-sighted as although we're currently paying the lowest amount at the pumps since 2010 I'd wager that the long term trend will continue to see fuel remain far more expensive than in years gone by. In the world of urgent freight, same day delivery and next day shipping most vehicles are not at the pinnacle of fuel efficiency but there is a push to try and change that coming out of Cincinnati courtesy of AMP Electric Vehicles.

This young company was founded in 2007 and until recently had been focused on converting SUVs and smaller commercial vehicles to electric models. They now hope to make inroads in the local and same day delivery market by launching an electric version of the traditional 'step van' that we typically associate with UPS. That famous square box design does exist for a reason of course as it holds significantly more cargo in addition to allowing for easy and rapid driver access.

The AMP version is called the Workhorse which will be powered by an all-electric motor in addition to a small gasoline generator as backup in case of a range emergency. Speaking of range, the vehicle offers 60 miles on an electric charge which according to the company would easily encompass the vast majority of UPS or local Fedex routes. The company also plans to include drones (to be known as the Horsefly) when and if the FAA gives 'drone delivery' clearance to the concept. The drone, which would be a vehicle accessory, would allow a driver to carry packages up to 10lbs in weight an additional two to three miles before returning/flying back to the vehicle.

Many observers still cite cost as the primary reason for electric vehicles not gaining market share more quickly but consumer studies show that range is actually the biggest determining factor. For commercial use and of course rush same day delivery such as ours, the vehicle range factor and ease/time of recharge would be incredibly important. Acceptance by delivery companies could in part be driven by cost of course with AMP suggesting that operational delivery costs can be reduced by two cents per mile versus a conventional rate somewhere near $0.50 per mile.

Perhaps the idea of electric delivery vehicles with special drones to extend range all sounds a little bit futuristic but then they would have said the same about interstate same day delivery a few generations ago. We'll wait and see what happens, especially when fuel prices go back in the other direction.

To learn much more about AMP Electric Vehicles visit their site.