The same day delivery market is expanding rapidly in 2015 and analysts suggest this is poised to accelerate over the coming years. For retailers the importance of grabbing a portion of the same day and on demand delivery audience appears to be of growing importance and while we've seen many companies expand services and options already this year word reaches us today about another acquisition that could be significant. 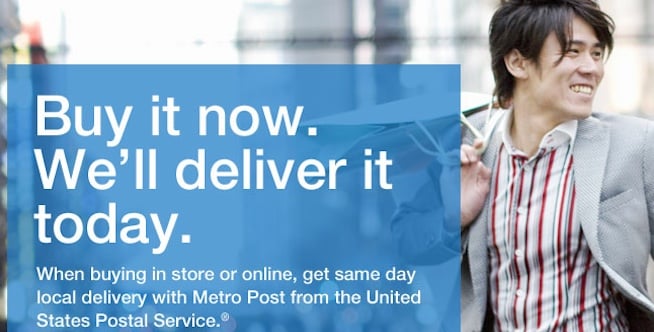 If any further evidence was needed to demonstrate the rapid growth in popularity of same day delivery services it may have just been delivered by the news that USPS are expanding their services in the arena. Up until now USPS had been experimenting with what they’ve called ‘Metro Post’ in just San Francisco (which struggled) and New York City, but now they have announced that the service will be expanded to include Washington D.C. along with certain suburbs of the city in Virginia and Maryland.

Are eBay quietly withdrawing from the same day delivery market?

Slowly but seemingly rather quietly eBay continue to contract their same day delivery services which some observers suggest reinforces the lack of readiness and cost appreciation of same day services by the internet giant. Over the weekend eBay silently removed their eBay Now app from the iOS App Store. Prior to removal of the app mobile customers were able to shop via their mobile devices from specific nearby partner retailers to receive same day delivery for a flat $5 fee.

The number of companies looking to add same day delivery services to their arsenal continues to expand, much of this driven by a demand for urgent deliveries of purchases but critically also within the business-to-business sector. In an economy that is finding its feet companies and consumers aren't in the business of waiting for deliveries or accepting late ones. Couple this with the fact that a new report shows consumer confidence has reached a seven year high this month suggests the addition of new expedited delivery services could well be a trend that's set to continue.